On July 13th 1954, at the tender age of 15 years 2 months and 4 days, I joined the Royal Navy as a “Boy” at HMS Ganges. Before this I had been fascinated by radio and intended to enrol in the RN as a telegraphist, but their Lordships, in their wisdom, considered me more suited to be a Signalman, a Bunting Tosser, so I became a Signal Boy on the conclusion of my training at Ganges in 1955.

My first draft was to HMS Adamant, the depot ship of the 3rd Submarine Squadron, based at Rothesay on the Isle of Bute in the Firth of Clyde, but from there I was drafted in September 1956 to join HMS Ceylon at Portsmouth. (In April 1956 the rate of Signal Boy was changed to that of Junior Signalman and it was in this very lowly rate that I joined the Ceylon). It is interesting to learn that Ceylon was laid down at Govan on 27th April 1939. Just 12 days later, in May 1939, my twin brother and I were born (although we had been “laid down” perhaps nine months earlier), and here I was 17 years later joining the ship’s company.

HMS Ceylon commissioned in Portsmouth on 11th September 1956 and there followed three months of frantic activity. Our first day at sea was on 13th September before we left Portsmouth for a work-up period at Portland that continued until 26th October. The “Suez Crisis” began at this time and Ceylon was despatched to the Mediterranean to join the assault force. On 30th October 1956 we arrived in Malta and two days later, on 1st November we departed to support the assault on Port Said that took place on 6th November. (Three days later I moved from being a “Boy” to become an “Ordinary Signalman”!). The presence of HMS Ceylon at Port Said meant the subsequent award of the Royal Naval General Service Medal to all crew members.

With the cessation of hostilities we returned to Malta on 23rd November and stayed in Valletta harbour until 3rd December, when we departed for our home port, via Gibraltar, arriving back in Portsmouth, in time for Christmas leave, on 14th December.

The three months since September had become an intense “work-up” period that we passed with flying colours and all crew members felt well-prepared to resume the original commission schedule to become the flagship of the East Indies fleet in 1957.

On 21st January 1957 HMS Ceylon departed the Solent to round The Cape of Good Hope (the Suez Canal was closed following its annexing by Col Nasser of Egypt) on its mission to take up station in the Indian Ocean, but on our journey around Africa we were destined to take part in various ceremonies in our former African colonies as the British Commonwealth started to emerge from the British Empire.

Two weeks in Gibraltar (31 Jan to 16 Feb) were followed by a courtesy call at Dakar in Senegal (the Paris of Africa – 21/24 Feb). Although we were in a French colony I remember playing cricket in Dakar in a match between Ceylon and the British ex-pat community, but I can’t remember who won!

Our next port of call was Takoradi on the Gold Coast where we arrived on 28th February. Independence celebrations were scheduled to take place in the Gold Coast (to be renamed Ghana) in March, and on 2nd March Ceylon moved from Takoradi eastwards along the coast to the capital, Accra, where we anchored offshore from 2nd to 7th March. A Guard of Honour was provided by Ceylon for the independence celebrations.

We left the newly-independent Ghana on 7th March to travel the short distance to Lagos, Nigeria where we arrived the following day to take part in the Nigerian Independence celebrations.  The ship’s company, while participating in all the ceremonies associated with the Independence celebrations, also enjoyed the five day visit to Lagos and various trips ashore, before Ceylon left Nigeria and the northern hemisphere for our journey south around the tip of Africa. In Lagos the ship was illuminated at night, and a special Nigerian guard assembled to salute our leaving harbour on 13th March.

Ceylon’s Guard of Honour parading in Accra and being presented to the Duchess of Kent, the Queen’s representative 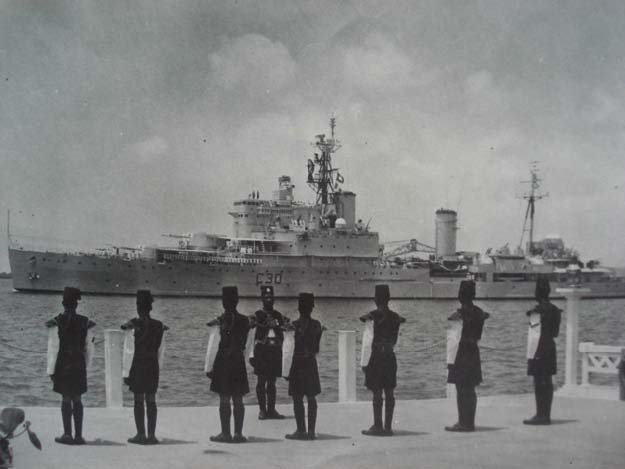 A day or so later we moved from the northern to the southern hemisphere and for many of the ship’s company, myself included, it was the first time the equator had been crossed so the traditional “crossing the line” ceremony was performed. We were destined to re-cross the line another three times during our sojourn in the Indian Ocean.

Captain thanks Neptune
Initiation ceremony begins
“First timers” are initiated
21st March saw us arriving in Simonstown, South Africa, where we stayed until 4th April. During this visit we “gave away” the Simonstown Naval Base to the South African Navy, and this meant yet another Guard of Honour from Ceylon was provided for the ceremony. For most of us this was the first time we had visited the Cape and many took the obligatory trip up Table Mountain to view Cape Town from this vantage point. 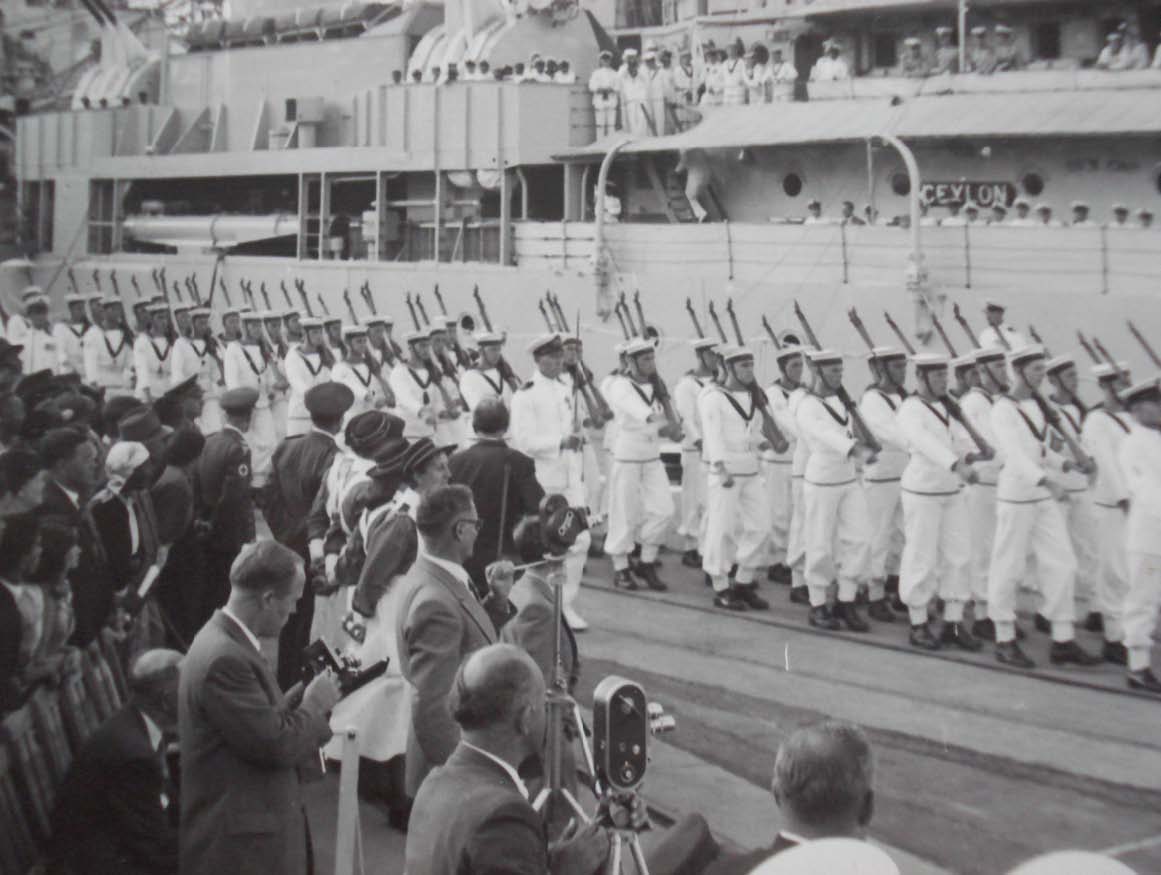 The formal hand-over of the Naval Base at Simonstown took place on the jetty alongside HMS Ceylon, March 1957

The Indian Ocean was entered on our departure from Simonstown and eleven days were taken to traverse this Ocean before the next landfall in Trincomalee, Ceylon, on 15th April. What a lovely port in the most beautiful of surroundings. As a very young bunting tosser taking watch on the bridge during our time in harbour I was astonished by the nightly electric storms that bounced around the surrounding hills. In the early mornings we could take out whalers or cutters and “pull” them to secluded coves for a quick swim before returning to the ship, refreshed and exercised, ready for our breakfasts. I remember that Trincomalee was the place in which I was introduced to the taste of Chinese food during a trip ashore.

HMS Ceylon at anchor off Zanzibar
Firework display at Zanzibar
Leaving the East African coast on 29th June we headed once again into the Indian Ocean to visit the Seychelles (2-6 July) and Mauritius (9-15 July), before returning to Trincomalee via Adu Atoll in the Maldives. (In1990 I re-visited The Seychelles on my 25th wedding anniversary to show my wife this idyllic paradise, and later, in 2005, I took her for a visit to the Maldives to let her experience this even more beautiful land of wonderful coral atoll islands. When the Maldivians at the resort learned that I had been to Adu Atoll in the 1950’s I was treated as a hero, but I think they were mixing their dates and had confused my visit with that of servicemen who had been in the Maldives during the Second World War!)

I was later told the purpose of our tour of the Indian Ocean was to enable the Commander-in-Chief, East Indies Station, to make a report to the Admiralty about the possible location of a major southern hemisphere radio station for the Royal Navy. Having surveyed Aden, East Africa, The Seychelles, Mauritius and The Maldives, this radio station was later established on Mauritius and it was operated by Royal Navy personnel for many years.

After a fortnight in Trincomalee we departed for an extensive joint naval exercise in the Indian Ocean, joining forces with ships from the Indian and Pakistan Navies. “Exercise JET” lasted from 12th August until 13th September, after which we called in for some dry dock maintenance in Colombo dockyard.

When we left Massawa we passed HMS Sheffield (I think) in the Red Sea, the ship that was going to take over from Ceylon as the flagship of the East Indies Fleet. Sheffield had been the first RN vessel traversing the Suez Canal since the hostilities in November the previous year, and the Ceylon was due to become the first RN vessel to traverse the Canal in a northward direction. On 21st November we entered through Suez and left at Port Said the following day. Everyone on the bridge was very tense and watchful for the two day transit of the canal, for the British were still seen as the aggressors in the conflict of twelve months earlier. Brief stops in Malta (25-27 Nov) and Gibraltar (20 Nov – 1 Dec) followed before we arrived back in Blighty and entered Portsmouth harbour on 5th December.

Having enjoyed another Christmas at home with our families, Ceylon left Portsmouth for a “showing the flag” tour of the West Indies on 15th January 1958, but with a brief stop in Portland on the way.

On 1st February we arrived at our first port of call, Montego Bay in Jamaica, followed in quick succession by visits to the American Naval Base at Guantanamo Bay in Cuba and St George’s in Grenada. I still remember St George’s as the most beautiful of locations. Ceylon was too large to enter the small harbour and had to anchor off-shore, but trips ashore by boat entailed entering a tiny horse-shoe shaped bay with steep hills encircling it with pastel-coloured dwellings dotted among the jungle-type foliage. It is truly a magnificent setting. Because the ship was not in direct line of sight of the harbour-side we had to establish a communications base in the St George’s fire station so that the ship’s boats and the Captain’s barge could maintain contact with the ship. I know both the Signalmen and Telegraphists were delighted to be asked to man this base as it gave us several hours ashore on watch when we could mix with the local population.

After Grenada there followed visits to Bequia Bay in St Vincent, Bridgetown in Barbados, Plymouth in Montserrat (I understand this town was subsequently demolished by an earthquake) and Bermuda, which we left on 10th March after a week in the Naval Base. On to Halifax, Nova Scotia where we experienced the enormous tidal differences between high and low – one of the largest tidal flows in the world, before returning to Portsmouth on 31st March.

On 14th April 1958, after a commission lasting nineteen months, HMS Ceylon de-commissioned and its ship’s company departed for new drafts elsewhere. The ship had steamed 60,049.5 miles during this commission and had spent 185.21 days at sea out of a total of 580 days in commission. It had served at Port Said during the Suez Crisis, been flagship at the Independence celebrations in both Ghana and Nigeria, and been present when the dockyard at Simonstown had been handed over the South African Navy, and the naval base in Trincolamee was handed to the Ceylonese. It had circumnavigated Africa visiting eight African nations, and shown the flag at remote island populations in the Indian Ocean, crossing the Equator four times. It had also visited the Persian Gulf, the Red Sea, the Mediterranean, the Caribbean and Canada, and given its crew a wonderful experience of life in other parts of the world.

I joined the ship as a 17years old “wet behind the ears” Signal Boy and left at the age of 18 a far more “rounded” individual thanks to the comradeship of my ship mates and the experiences we had all enjoyed.

(All photographs are reproductions of those taken by the official ship’s photographer, who, if my memory is correct, was a Leading Airman in the Fleet Air Arm, with the additional responsibility of being the ship’s meteorologist)

CinCEI with Sultan of Bahrein